i always have longs ass dreams where weird fucked up shit happens so i wrote one down today (9.12.21)

At first i was on a creepy forest ranch and we all needed horses. to get them we need to go into the forest and catch one (i saw an awesome red one i rlly wanted). so i secretly took some carrots and went into the forest. it was weird and foggy and hat a very steep cliff with multiple platforms and there was a long black monster thing i avoided eye contact with.some other kids got hit by it tho. anyways i get my horse and go to the ranch but them my dream cuts and i was wandering around the mountain forest (very beautiful this time) with some people and my parents were talking abt how they wanted to open a soap shop there and raise chickens and sheep lol. then we went to a little hit up in the mountain and there was a private mitski concert there where she made cookies for everyone and some guy in a gir (invader zim) mascot costume was there too. i also met two of my old classmates there and we talked a bit. when i tried to take pics but it didn’t work that’s how i found out i was dreaming. (now it got weird).

after that i was in a white room with other people and 2 art teachers and we were supposed to show each others work and explain it but they all treated me kinda shitty and i was the very last for some reason. then some dog human hybrid man came in (he was also part of the art course) and he was fucking freaky he tried to get to me but i whacked him with a chair. even more and more weird monster things came in and it got very chaotic. like a whole SCP foundation up in here. then some weird dream shenanigans happened where i got split by my brain and now i was me but there was another me who was played by an actor who sorta looks like me. (man idk how to explain). i kinda wanted to get out but other me wanted to kill mister oogey boogey from nightmare before christmas?? for some reason?? i think it was like a revenge thing and he couldn’t do it. some rude russian lunch lady didn’t want to help us so we went to this guy who was floating around. 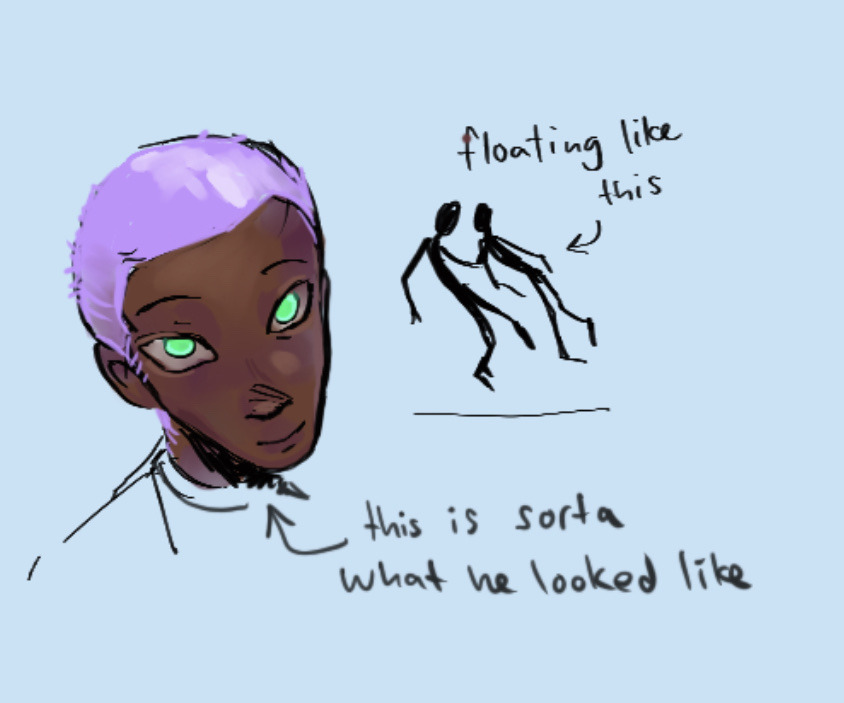 he was very beautiful (like in a hypnotic way) with lilac hair and green eyes and he grabbed other me by the shoulder. now they were both floating (i saw it from other mes perspective) and everything else got super mushy and slowed down and in and echoey voice from his head he said „dude… it’s not that hard“ then let him go and it was back to normal (as in non blurry and floating) and my other me looked all lovey-dovey (i think that guys power was mind manipulation to make u obsessed with him cuz i saw him „attacking“ another guy later) and then i suddenly knew what he meant. to kill oogey we need bug spray cuz hes bugs. so we go to that russian lady, have a quick bonding moment and she lets us have her bug spray. we slit oogeys head open and killed him and then i woke up.