Soooo Mari said it would be a good idea to pick up journaling and i think she’s right. My life isn’t eventful enough though so i think i'll document all the cool places i visit here in hell :) and maybe purgatory too who knows! 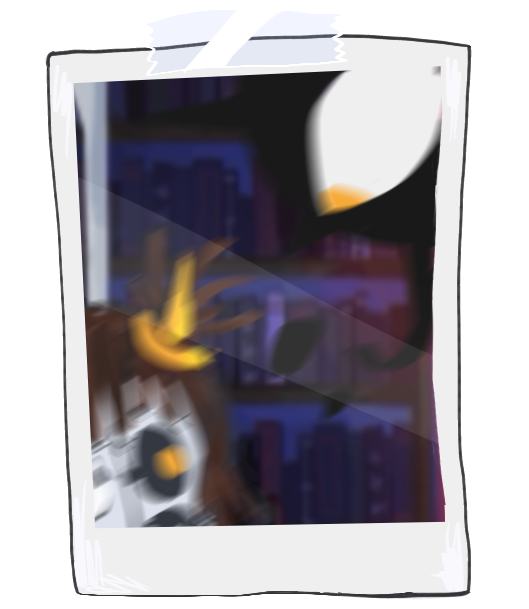 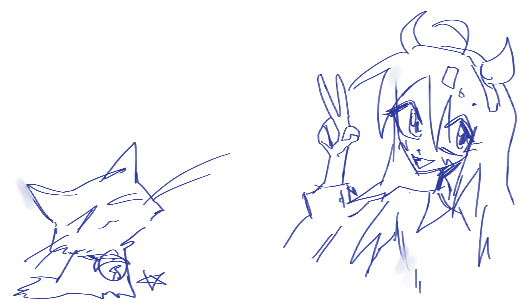 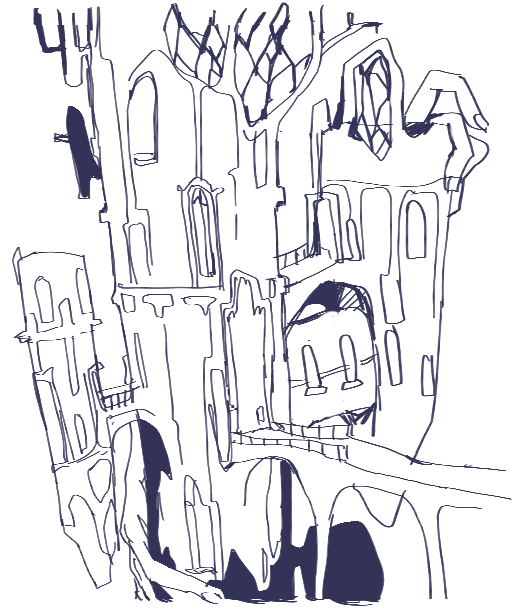 It makes sense to start of with that since this is where i work! People also call it the Library i suppose its both. And its HUGE! Like a strange tower except it’s connected with the ceiling of hell instead of the floor...well i guess since those strange statues are holding it up it’s also sort of connected with the floor. If this place even has a floor that is. I tossed a stone into the abyss once to hear it hit the ground but unsurprisingly that wasn’t very helpful. Ahh I’m getting off topic again! So the archive-yes! There are tons and tons of books here most of them i can’t read yet :( but I’m working on a way to translate them! Or maybe i'll find someone to read them to me? Well they are extremely interesting anyways i would have never guessed there was so much knowledge i didn’t even knew existed... 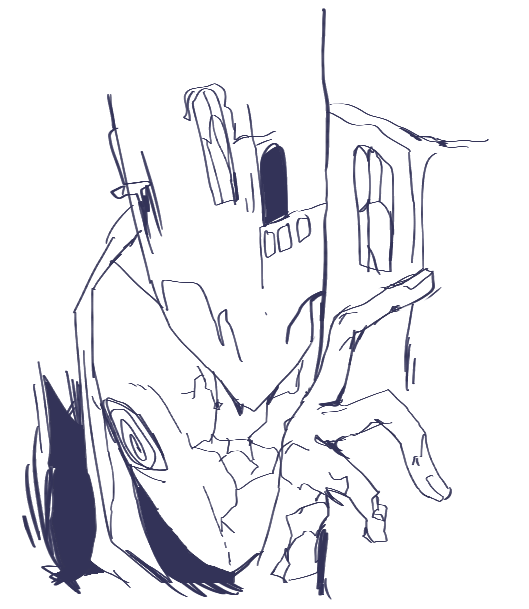 almost makes me glad i died haha ^^. Also it seems to be made out of the same white stone material as the ruins and the statues so it has to be OLD old. Well ok that’s pretty obvious haha. There is no comparable architecture in the living world it almost seems impossible. I wonder who built it though somehow can’t imagen that at all... i feels like it’s just always been here. I want to get to know Corium more they seems to know a lot more than anyone else but they’re always up on the roof ugh i never get the opportunity to talk to them. Well to be honest I’m also a bit scared of them ^_^' they're just intimidating ok? Also all that black sludge...yikes. 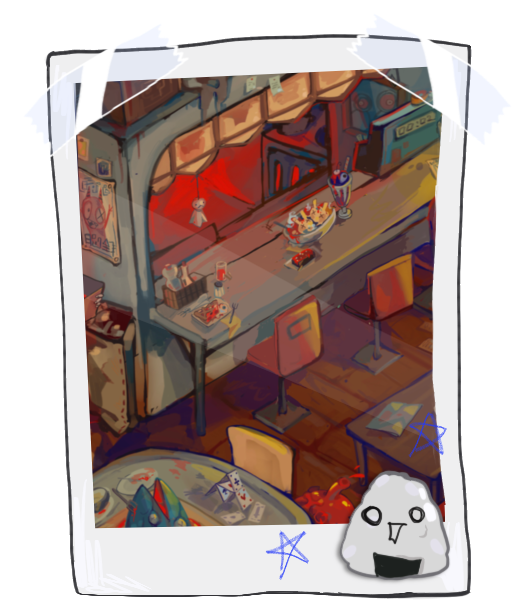 I don’t even know if that thing actually counts as a diner X) i feel like they always change it every few weeks last sunday it was a café and before just a regular restaurant. Trying to hit all the customer needs i assume! Can’t blame them! Jokes aside though i do like it there it’s quite cozy. Although the ocean/fish theming isn’t completely accurate all the time (i don’t think the owner ever visited a real beach before) i don’t mind listening to vaguely threatening and off sounding sea shanties. And the food there is not bad as long as you don’t question what’s in it. I might be overly curious but i've never had the courage to enter the kitchen...that ominous red light is enough for me. 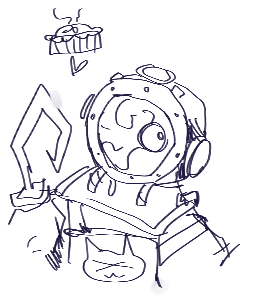 It's probably for the better. Also morti started working part time there! good for him! I wonder if it’s fancy enough to take mari on a date there..hmmm. Maybe if they start selling pastries haha who knows they’ll probably change their name to "gooey hook bakery" next week anyways ^^. The owner seems like a nice person too. Tall guy with an old timey divers suit and helmet. I wonder how he’s preparing the food without hands though? He tried giving me a high five once but i had to decline sadly (seems dangerous! i don’t know what’s worse- the giant hook or the ship turbine XO). Oh but they have really yummy meat pie! I had some when isaac and andrew took me there (they seem to REALLY like that place haha they’re hanging out there all the time on free days)

Eventho I’m an undead i've actually never visited this place before but today i thought i should check it out since a friend of mine had to go. It mostly just looks like a rose garden with a greenhouse and spikey metal fences, undead go here if their body is too damaged and they need a new vessel. I didn’t know how it worked exactly before but apparently you just need to bring your old body or atleast some blood and then the gardener plants it here wich grows a perfectly good new body (sadly i Couldn’t watch it directly)! Pretty weird but also kind of cool. Good thing this service exists though I’m glad about that, not everyone wants to look like isaac afteral. No offense to him of course! In a way i find it admirable to stick to your original like that but i can’t say I’m not surprised he hasn’t decomposed completely yet.

The gardener is a pretty odd guy too...or girl? i don’t actually know but i guess it doesn’t matter^^. They rarely ever talk and wear a bathrobe and pajama pants everywhere they go. Not that I’m judging honestly I’m a bit jealous. As cool as this dress looks it’s uncomfortable as hell XO! Well i think they’re probably just shy or aren’t used to so many people coming there. There aren’t many plants here in hell so this was actually quite nice :) I’m not a big fan of roses usually (i prefer irises) but they’re still better than all the red rocks and stone stairways I’m used to seeing . 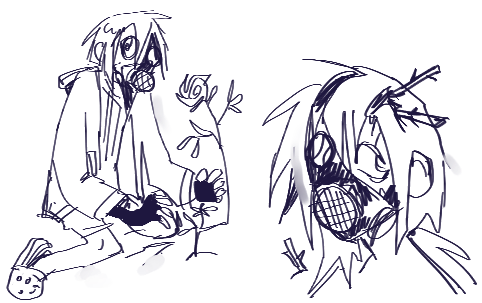 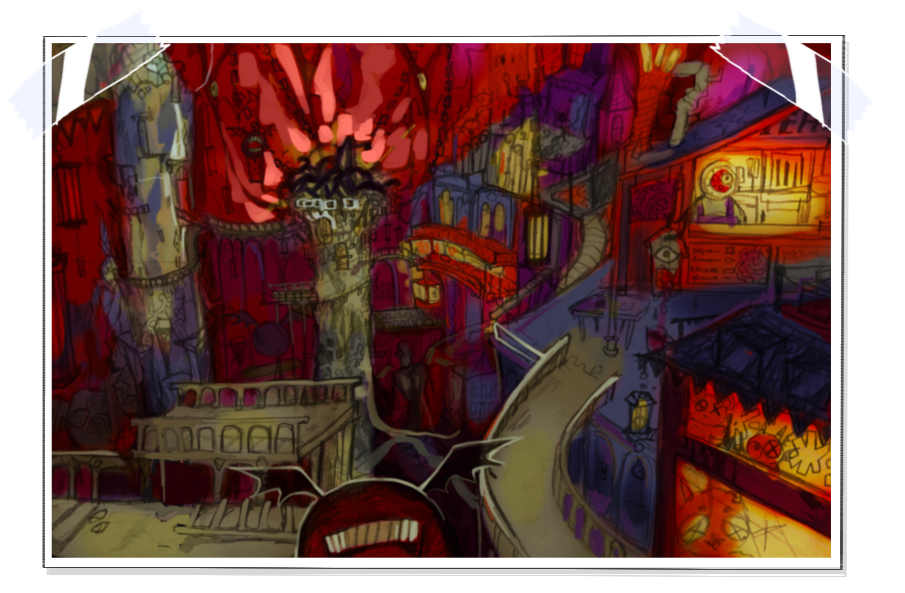 I've found that while on Earth you exist in a physical sense and in purgatory simply as a soul, in hell it’s sort of a mix of both? It’s more of a theory though. I mean i can only speculate haha but it relly feels like there are no rules to your form here. There is flesh but there is also... whatever all the other stuff is..? A concept, a feeling, bones, they can all just exist here. It’s almost like this place itself is a living, breathing organism if that’s even possible. but then again maybe anything is possible.

Since i was in the area today i thought why not visit? After all knowing how something is created can greatly help you with understanding it better! And this is the place where demons come from...sort of. When a human who formed a contract dies, this is the place they get reborn into their new life at. They crawl out of the water like a tadpole haha cute. Okay it’s not cute actually a pretty dangerous place because they’re usually very disoriented and don’t know what happened to them or where they are so they might lash out at you. So i had to hid behind a rock. Yea the rocks here... look very organic almost like they’re alive. But maybe that’s just because the water leaves a wet sheen on them wich accentuates their redness.

I don’t know if i can actually call this "water" either... i mean it's orange. At times like these i wish i could just send a sample to a lab or something but alas, i may be smart but i don’t know shit about sciency stuff like that. And BIG SURPRISE there are broken statues everywhere haha just like at any significant place it seems. These did get more eroded from the water or- liqid overtime so there are mostly just a few fingers left. Oh also i've heard that there is a small underwater B-district for aquatic demons somewhere near here. Might check that out next time^^

I know in my last entry i said that i would check out the underwater area but ahhhh i'm so busy! So much to do theres no time right now :(. I DID go to the regular b-district though. On behalf of the Archive of course

It was...interesting. Surena told me to not go alone cause i'll just get lost that way. The only person i'm colse to who used to live there is marisol of course so naturally i asked her to go with me. But... i kind of regret it. When i asked her she immediately said yes and when i said where exactly we would go i could feel how uncomfortable she suddenly was. I didn’t think too much of it but now i remembered that she had some family issues and probably doesn’t have the best memories of that place. I fell HORRIBLE. Why didn’t i thik of that before??? of course she would never recline a request from me because she’s literally sweet and perfect. God i'm going to apologize to her after this. I'm so stupid.
Anyways... The B-district mostly consists of many apartment complexes that reach all the way to the ceiling of hell and connect with one another at multiple spots. So i definitely understand why Surena said i'd get lost. It all looks very similar... i can tell there was some architectural genius involved in building these tho it reminded me of a beehive. fitting, i suppose^^.
Seems like it used to be a very busy and crowded place in the past but now many of the buildings look quite barren. Still more lively than the center-A-areas where everyone stays in their houses. But everywhere is this sense of quiet melancholy in the air, like they all know their best days are over even if they don’t talk about it. Well can’t blame them when you think about the state their Mother is in.

Unlike what most people here will have you believe, there is far more area occupied by type Bs than by anyone else. At least when it comes to buildings. i guess it makes sense? Sort of? Since they’re mostly insect-like you would think they’d reproduce more rapidly than any A type could with their tedious contracts, therefore needing more space. Looks like that was definitely true, at least back in the day...

I know it seems really obvious but honestly i wasn’t aware of just how many there were and how big this entire underground-ish ovum cave system thing is. Got distracted by all the flashy lights of the inner districts hehe...^^' man i feel like a broken record always repeating the same few words bla bla type A bla district bla area bla i'm sorry. Can’t exactly help it, but I can imagine it makes for quite the tiresome reading experience. Who am I even apologizing to, this is my personal journal...gosh.
i mean god. I'm just all kinds of distracted today.
Also i need to let go of this obsessive fantasy that someday some smart cool person will read my notes and say something like "tsk...fascinating." like a ...demon archeologist (that sounds so awesome omg). Which of course is totally ridiculous and I need to stop daydreaming about stupid silly things like that and get back to work already. GAH.
Seriously, what is with me the past few days. I can’t concentrate at all. Back to what i was saying. This place is where the Mothers eggs hatch like some sort of hive. And it used to be very organized, judging from all these ways and stairs connecting everything. Looks quite empty now , although it’s still being used obviously. Seriously creeps me out a bit standing in front of such a huge construct, its Imposing to say the least. I'd give a lot to be able to see it in its prime but alas just like with everything else it feels as though i am a few centuries too late.