A long time ago there was nothing. And then there were the first ever demons, One of them, the Vather, looked almost completely human and had the ability to enter their world and form contracts with the living. In exchange for knowledge, power or special abilities they would be reborn as demons themselves once they died. 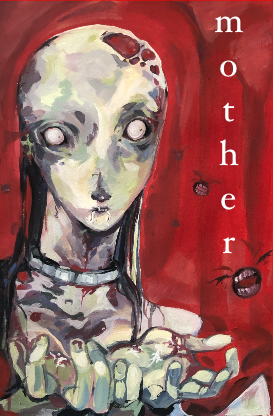 The other one wasn’t fully humanoid like her counterpart, instead she had a termite queen like appearance and couldn’t leave hell. Yet she could give birth to new demons by herself and they called her Mother. Quickly hells population grew bigger and bigger but they remained mindful of the cycle and tried to retain it as much as possible. But then one day Vather vanished and left their realm in shambles. Mother wanted to leave as well, she felt suffocated by everything but her children wouldn’t let her go. They chained her to the center of hell so she could forever give birth to more offspring and they could grow more and more. Without their Father they stopped caring about the cycle wich lead to most of their demise when the angels finally had enough and attacked hell only leaving ruins of what once was behind. It took them centuries to rebuild what was lost and to grow in numbers again. Mother kept getting weaker with every year. She used to try to escape but nowadays she doesn’t even talk or react to anyone anymore. Her newer children aren’t what they once were either and many are weak and deformed. The damage from Fathers disappearance and the angel attack were devastating and the effects it has had can still be felt today. This is why for the past 200 years some demons have been working harder to keep the cycle intact but in the grand scheme of things this world is in its last breaths.

Tybe A demons are the descendants of Father and just like him have the ability to enter the human world and form contracts. This is the most efficient way of getting energy because the human sells their entire soul and it’s also their way of reproducing.

Its quite hard to find a human willing to do that though so most of the time they just resort to possession and murder wich is way easier because there is no consent Involved. They all have the inner urge to become more powerful and rise up the ranks so they need to consume souls otherwise they will just get killed. Yes they can die but they are partially immortal that means if they don’t get killed they will live forever. Their appearance varies but the majority are monochrome (black, white and red) humanoids with unnatural features like horns, different sized limbs, doll or marionette like bodies etc. They also often secrete black ink like substances. Another relatively common group are the ones who seem to be stitched together with multiple body parts and hospital/scientist like imagery. The reason many of them look similar is altho their former traits as humans influence their demon form so does the appearance of the demon that made the contract with them, wich makes them in a way related. Tybe A demons are highly dangerous and often unpredictable because they don’t think the way we do. They do not feel emotions like humans do and are mainly driven by negative concepts like control, regret, isolation, obsession and madness, they usually don’t understand things like empathy. But they are not Inherently evil in any way. They do what they must to survive but they have distinct personalities and motives and it is possible to befriend one eventhough they look down on most lifeforms.

Type B demons are Mothers children and like her are usually more monstrous looking. The older ones with insect like features like exoskeletons and the younger ones often with grotesque bodies

showing exposed flesh and organs. Don’t be fooled by their appearance though they actually have more in common with humans than any other entity. While A types are more of a concept or negative emotion taken physical form, B types are more of the animalistic things in us. If A types are the mind then they are the body, Usually driven by things like rage, revenge, feelings of Inferiority or determination. They are less manipulative and more straight up violent. But that anger is usually directed towards other demons than humans because they can’t leave hell. They purpose is mainly to build and to expand their realm. So even if they’re more physical don’t think they’re somehow stupid, they can be just as intelligent as anyone else and they’re great architects. Afterall they are the ones who built everything you see in hell and even have their own language (Nowadays every demon speaks it but they invented it first). And again just like everything else, they are not evil.

Very little is knows about AB demons. Basically they are a extremely rare and only occur when an A and a B demon reproduce, wich shouldn’t be possible because normally no demon has functioning reproductive organs so there would have to be a very rare mutation TWICE and they would somehow have to find each other. There is only one known AB demon and he’s currently locked up for further research.

Fiends are a subtype of B demons. They aren’t as intelligent and are more like animals in general. 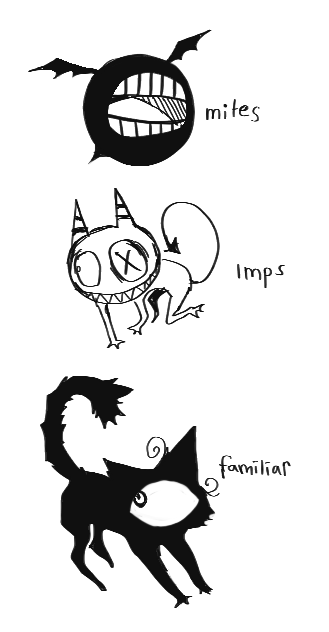 Mites are small black fiends with wings and a mouth. Their size can go from comfortably fitting in your hands to up to 7 feet tall. They are absolutely everywhere in hell and altho some keeps them as pets they are considered a pest by most (basically imagen demon pigeons). Some of the bigger ones can be trained to transport things via flight wich comes in handy considering half of hell consists of a huge bottomless pit.

Imps are a bit smarter than mites but still can’t talk. They aren’t nearly as hated though because most people think they’re cute and they can be given simple tasks. They can be pretty mischievous at times but not dangerous and are only as big as a small dog.

Familiars are a bit of a special case because eventho they’re fiends they can become very Intelligent under the right circumstances. They are shapeshifting parasites who feed one peoples thoughts (the more they feed the smarter they get). They can take the form of anything they want, usually animals, and are black with a single big eye also completely mute. But on rare occasions they can bond with a demon they like and form a sort of symbiosis allowing them to communicate via telepathy with their partner. It's not known where exactly they come from and many doubt that they’re truly type B and not something else completely.