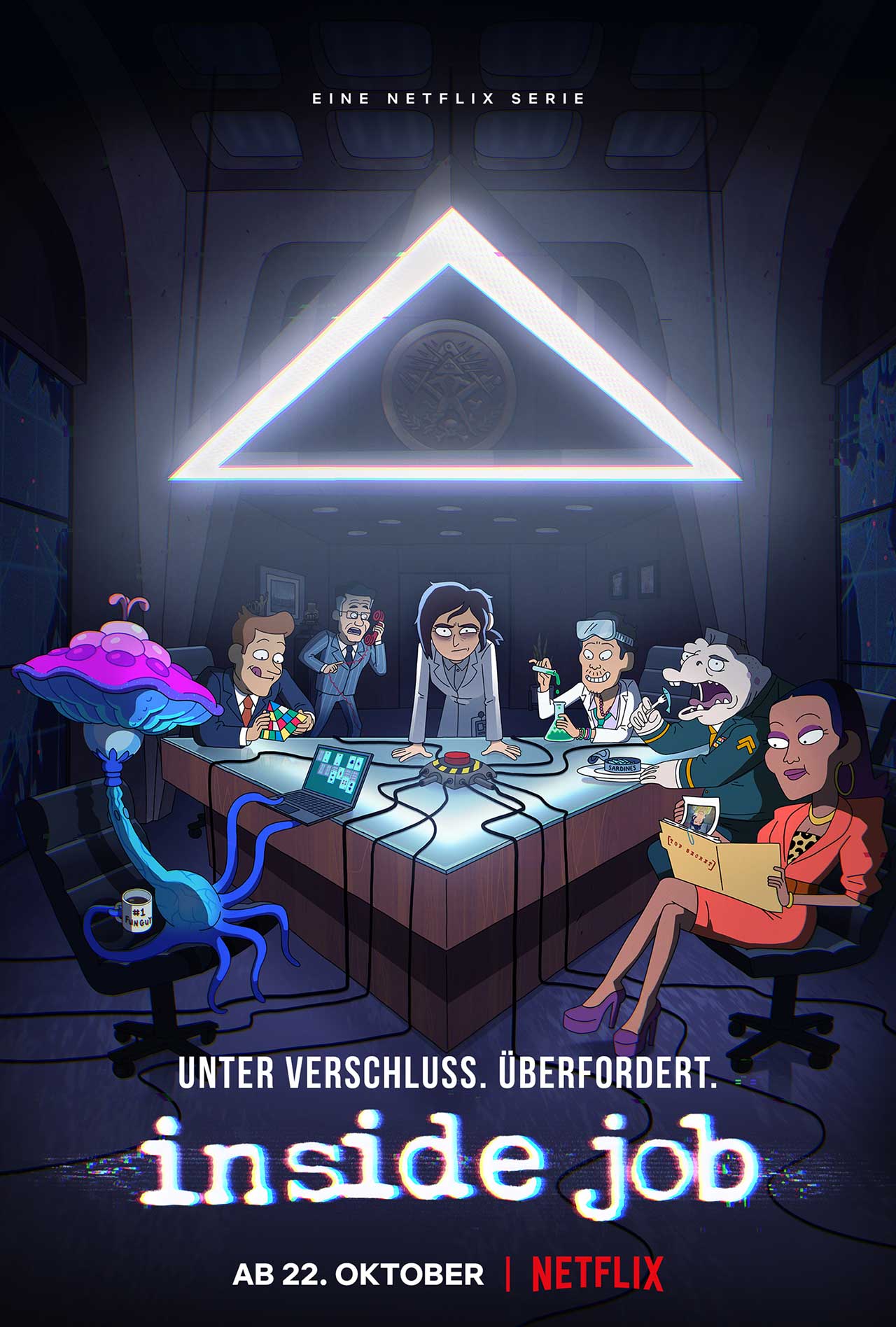 you can watch it while eating or drawing its fine for that but overall pretty mediocre show imo. it sorta has potential tho.

Inside job is a netflix animated comedy about conspriracies and stuff. Im asuming youve already watched it but you can also read this if you havent yet i wont spoil it.

ig ill start with what i liked about it. first of all i rlly like the concept.. i mean conspracies are very interesting and stupid most of the time and a bit creepy thats perfect for an adult animated show and gives you many cool plot and joke oportunities. Its also cool that the creator of gravity falls worked on this cuz i loooove gravity falls (doesnt everyone lol?). Also the animation is pretty nice. the two main characters Reagan and Brett are alright personally i didnt care too much about them but i know a lot of people rlly like them. theyre decently developed and have a nice dynamic. there are some funny jokes here and there but thats mostly all the good that stood out to me.

now ill get to the things that bothered me. first things first it wasnt all that funny (humor is subjective ofc this is my opinion) it had a lot of jokes but they just werent that good most of the time. they relyed on references a lot wich is to be expected since the whole show is largely based on pop culture and i dont hate those jokes inherently but they felt kinda forced and outdated most of the time. there was a "like a boss" joke in the first episode like dudeeee in 2021? Since they spent all their character development on brett and reagan the rest of the cast are basically only for comedic relief. exept theyre not funny. most of the jokes are about how theyre assholes. the fungus and the drug guy have pretty much the same personality and the other girls whole thing is basically saying "let me take a selfie before canceling you on twitter. hashtag L.O.L."

something more serious that was very icky to me was that there were many weird underlaying right wing vibes. for example there was a big plot abour lizard people and they never mentioned or acknowledged that thats a very antisemetic conspiracy...and it would’ve been very easy to at least make a joke about that. Also something felt iffy about Gigi but i couldnt put my finger on it. then i saw a tweet about how shes the only black woman in the cast and she has that stereotypical "sassy" personality so yeah... Another thing was how they portrayed addicts in that episode where andre was sober and how instead of just making reagan autistic since she has very obvious symptoms and it would just make sense they just make a joke about her mom thinking she might be autistic and her reacting like "ew wtf no". in general there were many such moments and it was very offputting :/.

eventho the animation was nice i didnt like the artstyle that much i wish they went with something more original instead it just looks like another rick and morty clone. but i think that sums it up pretty well its in that awkward spot between being just another forgettable netflix show and being one of the good tm adult animations. i think it has the potential to be an 8/10 in the second season if they quit the weird shitty things (a lot could be fixed if they just gave some development to the side characters that would make the show funnier too)

update: i just watched the second season and well, i kinda like it even less now. honestly i dont get why its popular online when its just so painfully... mid. the characters are as one dimensional as ever and the jokes are just so lazy and bad. idk the humor is just what i can discribe as "some 34 year old vaguely liberal (but in an ~edgy~ way) dudes who are into podcasts got together to make the most average and cynical adult animation netflix show ever". like no scene is allowed to be serious and no character is allowed to be intimidating they all have to break any immersion that happens to occur with some lame lampshading, 4th wall breaking joke. and besides a handfull of characters the entire cast could be easily replaced by each other. what i mean by that is the way they write character interaction never feels like something a person would actually say, its all just excuses for more jokes. and the jokes arent character or even situation specific, they could be said by anyone at any time. whatever i dont wanna turn this into some reddit rant cause who cares. the show got canceled anyway. oh but! atleast we got like 56 more celebrity cameos. hurray! doesnt veryone love those? (i am a hater and the show has no charm whatsover to me. at least the concept is kinda cool.)